I kicked off the morning with the Ozark Open Water Swim at Hickory Creek park on Beaver Lake.  The swim this year was called Release the Beast and is a fundraiser for the AquaHawgs kids swim team. 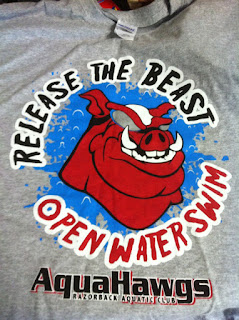 I participated in this race two years ago when it was in September.  They moved the race to be earlier in the season so that it didn't conflict with the Long Dam swim in August.  The race distances are .6mile, 1.2 mile, or 2.4 mile.  I elected to do the 1.2 mile distance again which is a one loop course.

The course is laid out as a straight out and back along a buoy line.  The weather conditions today were dramatically different than in 2010.  For starters it was in the upper 70's versus 54 at race time! The water was also a little chillier which made it a wetsuit legal race.  (Side note: I highly recommend TriSlide for any wetsuit races!)

There was a brief pre-race meeting to go over the course and logistics for the different distances of the races.  This was an event that was open for both Masters swimmers as well as Age Groupers (otherwise known as kiddos!)  The Masters got a head start on the kiddos by 5 minutes or so.  We all headed into the water and self seeded ourselves.  The race director let out an air horn and signaled the start of the race.

I swam next to my friend Britt for a few minutes and then I felt like we switched sides and was gone.  I was a little panicky for the first few minutes until I could find some open water.  The water was super choppy from the wind and it was a little frustrating at first.  Eventually, I settled into a rhythm and plodded my way to the turn buoy.  As I neared the buoy, I was surprised to be in the wrong lane of traffic! I had drifted to the left of the buoy line and it was as if I was headed into oncoming traffic.  I shifted to the right and was pumped to make it around the buoy.

There's something about a swim race that is just interesting.  There's so little exterior noise to process...it's just you and the water.  I tend to hear bits of songs in my head and have pep talks with myself.   The first pep talk was during the first few minutes of the race.  The crush of people is always overwhelming and it takes some reminding to know that I can do it.  The next big one was during the return trip.  The distance between the turn buoy and the 2nd buoy just seemed to take forever.  It felt like I was zig-zagging and not getting any closer to the buoy.  I ended up doing some math trying to calculate what distance would be left when I got to the buoy to distract myself and keep focused.

The last buoy was about .3 miles out and I equated that to about 10 minutes more of swimming.  I don't swim with a watch and during the entire race had no clue of how much time had passed.  I was really surprised to see the clock at the end and see that I had done the event in 34 minutes and some change.  That was almost a 10 minute improvement over my time in 2010.  I'll take that kind of a PR!!!

Britt did awesome too...she did the 1.2 mile and killed it for coming off of being sick recently.  After I told her that I thought she had ditched me on the swim since I had lost her after a few minutes.  I think I started pulling left towards the buoy line and she stayed on the outside edge of the course.  Either way...fun times with friends!
Posted by RunningWhit at 9:53 PM No comments:

Back to the Open Water

Tonight I headed out to beautiful Beaver Lake for a group open water swim.  Normally, I wait until my first race of the season to do my first open water swim so this is a new take on training for me!

I got out there to do a short run first and the breeze by the lake felt great.  It really helped with the temps since it was low 80's and sunny.  Every so often there were shady spots that also helped since I'm still working to acclimate to the summer temps.  After finishing up with the short run I met up with the others that were there for the group swim.

It felt strange since I didn't know anyone there.  I usually train with my friends and this was a branch out to join a local tri club's workout.  It was actually a combo of two different workout groups which included the one that I used to do last year.  There were people of all skill levels and maybe 12 or so total.

As with any group event, we were slow to get into the water.  I waited until the last minute to put on my wetsuit since I think they are too hot for just standing around in!  The good news for the night is that my wetsuit still fits!!! Honestly, I hadn't put it on since my half ironman last year (and there was still a little Oklahoma red mud on it too!)

Everyone pretty much swam their own workouts at their own paces.  Most of us swam for about 40 minutes.  I had to take a break after my first loop to change out my goggles.  I needed a darker lens because we were headed into the setting sun for part of the loop and I was having trouble sighting with lighter lens goggles.  I did 3 loops total which was probably around 1 1/4 - 1/2 miles.  The last loop included some play time in the middle of the loop of just bobbing in the water and talking to others.  The water was really choppy for that last loop due to a boat pulling a tube right in front of the swim beach area.

We finished up with a couple mass start practices for some of the newbies in the group.  I did my best to try and attack the new girls but I just felt bad for doing it.  It really does help to practice the mass start and learn how to work through the panic that it causes.  Even after 3 years of triathlon I still have panic moments in the swim.  Working with friends helped me learn how to work through it.

Overall, it was a great first open water swim.  My pace felt good and I think I did well handling sighting and the chop in the water.  My big struggle for the night was actually getting into and out of the water.  Somehow I managed to step on big rocks several times and might have bruised the bottom of my foot.  Hopefully, it's just tender and will feel better tomorrow!
Posted by RunningWhit at 9:52 PM No comments:

Today there were just two of us at the pool for our regular Sunday Funday swim.  That's not surprising since it is Mother's Day after all.  I started off with my favorite warm up which is a 1000 yd ladder.  The ladder starts with a 400 yd swim, nothing special just continuous swim.

Next is 300 yds of drills which is done 75 yds per stroke.  I usually do one armed butterfly with a 25 free in the middle since my stamina for butterfly isn't that great.  After that I move on to backstroke with a six count drill and also a drill to focus on leading with my pinky.  I don't really know the name for these drills but for the first I kick for a count of 6 and then do 3 arm strokes and return to the six count kick.  For the second, I bring my hand out of the water thumb first until it is perpendicular to the water and then I switch to pinky first as I finish the rotation and enter the water.  For breast stroke drills, there is the double kick and another where I try to cup the water as I bring my hands out of the water to start the stroke.  Again, don't know the names for these! Lastly for freestyle I have been doing this drill a lot lately which is 25yds single arm swimming and then the final 25 yds is catch up drill where I keep my hand in front until the opposite hand enters the water.

After drills, I move onto 200yds of kick.  I usually try to do this as 4 x 50yds descending and I alternate between breaststroke and free kick. To finish off the 1000yd ladder I do a 100 yd pull.

After finishing up the warmup, Jen and I decided on our first set.  We have different paces so we elected to do a set limit of time and see how many reps that we could get in during that time.  We selected a 5 minute time and a set of 50's with 25 backstroke fast, 25 free recover.  I managed 5 in our time limit.  Next up was a 150 pull just to have a little recovery time.  I don't know why but backstroke always burns out my legs.  Then we moved on to doing 75's...just freestyle.  I did 6 on a 1:30 interval and usually got 15 seconds rest within that interval.  We went back to 50's doing this set as breaststroke for 25 and free recover.  I did 6 of these but the last one was just all freestyle.  I finished up with 6 x 25 sprints except my sprints weren't that fast.

All told with cooldown I got 2650 yds in for the day.  This got my total up to around 61 miles for the year which is over 41% towards my goal for the year.  I am about 5-7 miles ahead of where I should be to be on track for the goal so I'm pretty happy with that.
Posted by RunningWhit at 9:34 PM No comments: