Friday evening I rushed out of the office to head home to prepare for my very first trail race.  The race was held at Blowing Springs park in Bella Vista.  This is an RV site located within Bella Vista where over the last few years the city has added miles of single track trail.  The trail system connects with those in Bentonville and is part of the EPIC route to connect to Missouri.

The trail race was a fundraiser for a local Boy Scout troop and offered both a 5K and 10K distance.  I selected the 10K distance and wasn't all that sure what to expect from my first trail race.  I arrived at the race site just before 5:30PM and noticed that parking was being held about 1/2 mile from the trail at a local business.  This was probably my only complaint about the race...registration was held at the trail head so you had to walk to/from your car a few times.  I think registration would have been better conducted in the same lot as parking so that you could retrieve your goody bag and then return to your car.

In preparing for the race, I selected one of my brightest colored tank tops to wear.  My thoughts were to be bright in case I got lost in the woods! I also selected my Fuel Belt with just a couple of the water bottles attached.  I wasn't sure if there would be aid stations on the course so I wanted to have water with me just in case. 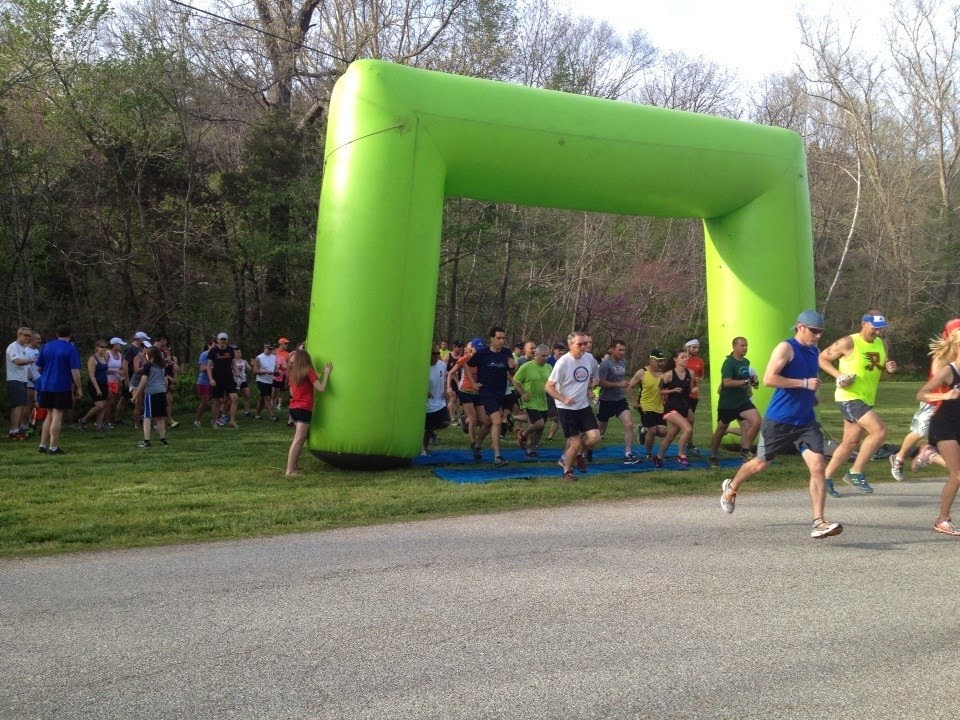 There were about 80-100 racers in the two different race options.  The race began about 100 yards from the trail head and let me tell you that was not enough distance for the crowd to spread out.  We even waited a little while before heading to the trail head but still ended up walking for the first few minutes.  It took about 1/2 mile before we were able to really get into our pace groove.

I ran with my friend Lori for the race.  We stuck together the entire race and enjoyed the sights and chatting the whole time.  I think Lori got to enjoy more of the sights than me as I was busy staring at my feet trying not to trip over rocks and roots.  There were a few sections of the trail that were much clearer and it was smooth running over those but then some sections were very technical.

The Boy Scouts offered several aid stations along the course with water and Gatorade offered.  One thing to note is that in a trail race participants should consume their beverage at the aid station.  Don't take a cup with you like you do in a road race because no one wants to see your cup littering the trail.

About mile four I realized how tough this race was going to be!  For our normal trail run outings, we have been stopping at intersections of the trail to let the entire group catch up and regroup.  Those breaks really make a difference and going straight through was a big change.  I did have to walk a few sections of the course that are scary to me along a sloping section of the trail that is right on the edge of a ledge above the campground.  For the most part we kept a steady pace but I definitely needed some power hiking on some of the inclines.  The short steep inclines on trails are tough!

Headed back to the finish, there was a sweet volunteer giving us directions for a section that had a couple of trails to choose from.  We followed her directions and we could hear the music pumping calling us toward the finish line.  We came out of the woods and then took a confusing jaunt through the parking lot to return to the timing mats and finish line.  We started the race together and we finished it together!

With such a small race, we were able to get race results pretty quickly.  I was surprised to see that I won my age group! My buddy Lori got 2nd in her age group too!  What a way to kick off my trail running experiences!
Awards were handed out to the 5K racers and then after a slight delay the 10K awards were given out.  We didn't stay for the 10K awards and instead a friend picked up our medals for us.  We were hungry and chilly after the sun began to set so we headed nearby for dinner.  I tried to make it an early night because somehow in my craziness I had signed up for a road 10K on Saturday morning.  Wouldn't you know I couldn't fall asleep for the life of me!
Posted by RunningWhit at 9:14 PM 1 comment:

Disclosure: I was not financially compensated for this post however I did receive a free product sample from Huma Gel to sample their newest flavors.   All opinions shared below are my own based on my personal usage of the product.

Last fall the founders of Huma Gel reached out to me about trying their new energy gel.  I had heard lots about Chia seed and was very interested to try it out.  Once I got my hands on the original sample flavors I fell in love with the great tastes! I was surprised at how natural the tastes were compared to most energy gels out on the market.  I quickly joined the Huma Gel IndieGoGo campaign to help fund the company's expansion into new flavors.

Huma Gel launched it's two newest flavors at the end of last year...Blueberries and Mangoes.  I tend to rotate between using gels and chews but today I decided to fuel my workout with the Blueberries flavor Huma Chia Gel.  Hope you enjoy my VLOG posts! 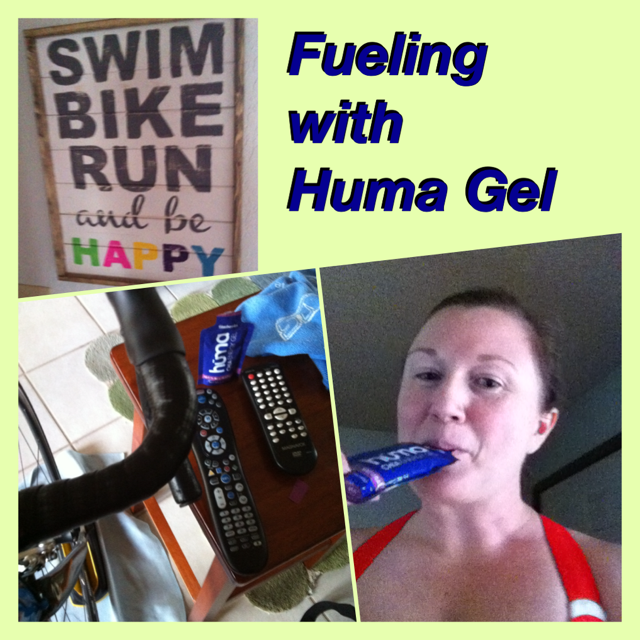 So...I'm a dork and jumble my words while working out! And I'm so glad you can't see how much sweat I was dripping during that final video.  Yikes!

One thing I forgot to talk about in my videos is the taste! I really enjoyed the new Blueberries flavor.  It's very natural and tastes like a fruit puree.  The chia seeds are ground up so it isn't chunky or anything.   It makes me think of those sauce purees that you get served swirled on a dessert plate.

You can find out more about Huma Gel by visiting their website at Huma Gel.
Posted by RunningWhit at 8:45 PM No comments: