Winter is coming...do you have your Yaktrax?

Yesterday our forecast included the first prediction of snowfall for the season.  The snow began around midday with beautiful flurries.  They didn't last long and sadly there wasn't much accumulation.

I was out running errands when the snow started and I stopped by a friend's house.  Her husband was just returning from my favorite running store, Rush Running (one of the top 5 running stores in the country!)  Jon had been in to the store to pick up a pair of Yaktrax for Lori.  Another friend had gone in earlier and texted them that the store was down to just one pair of Yaktrax left.  They are on a marathon training plan and their friend was telling them that snow wouldn't be an allowed excuse for missing any runs on the training plan!

Some runners had gotten smart this year...at the first sign of snow in the forecast they had gone to the store and picked up a pair.  Usually what happens is we get snow and then sales of Yaktrax increase as people realize that we live in the South and it takes awhile for the snow to get taken care of if the temps don't warm up after it snows. 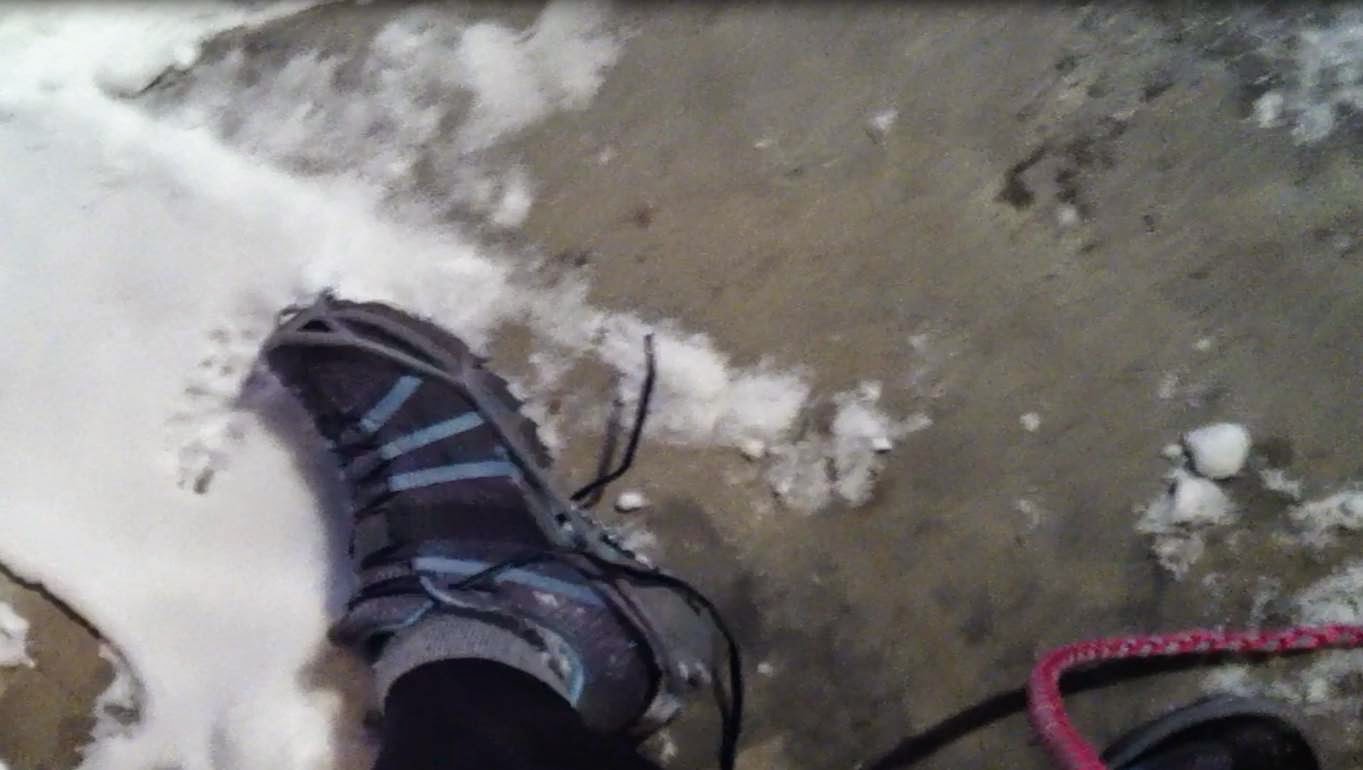 I first heard about Yaktrax a few years ago.  And like most runners I thought, "Nah, I don't need those."  I think that was one of our snowy and icy winter years and I was stuck at home for several days in a row.  Getting out onto the icy roads was tough since I didn't have anything to keep my running shoes from slipping on the ice.  Lesson learned...I ordered snow boots and some Yaktrax soon after that.  Wouldn't you know...it didn't snow again that year!
Since that winter, I have used my Yaktrax several times a year whenever we have snowy and icy road conditions.  We have hard-working road crews but it is just hard to work snow removal in the South when it just doesn't snow all that often.  Yaktrax keep me from going stir-crazy when I'm stuck at home due to the snow.  I might not be able to drive on the icy roads but with Yaktrax I can safely run! They are super simple...you just pull them on over your shoe.  They fit snugly and I've never had issues with them coming loose from my shoes.  If I run into clear roads I simply remove them and carry them until the road gets icy again.  Our road conditions truly vary depending on where it is and whether or not that section of the road receives sun and or multiple visits by the road department.

The concept for Yaktrax came from the sherpas in the Himalayas.  Yaktrax are made of a patented coil traction device that attaches onto your existing shoes.  There are so many different options based on the type of activity that you are going to participate in from walking to running.  I have the original design which is now referred to as the Walk style.  The run style contains carbide steel spikes in addition to the traditional coil system.  It also has a strap system to ensure it stays put on your shoe.

The makers of Yaktrax contacted me and offered to provide a pair of Yaktrax to one of my readers.  Please enter the Rafflecopter below to be entered.  The giveaway will run through November 26th and I'll announce a winner shortly after it closes.  Good luck and hope you get your runs in regardless of snowy weather this winter!

Disclosure: I was not provided any compensation in exchange for my review of Yaktrax.  I purchased mine and agreed to share a review and giveaway with my readers based on my own experience with the product.
Posted by RunningWhit at 8:33 PM 5 comments:

Years ago I was a frequent attendee to spin class during my lunch break.  Several of my coworkers went to the same gym and it was like we had a spin class club.  The gym that we went to underwent some ownership changes and we all eventually selected new clubs.  After that I struggled to find a spin class that fit my schedule as well and I started to get in spinning through trainer workouts.

At the same time, one of my running buddies has had a lot of knee issues.  She took up spin class as an alternative to running.  Over the summer we did a deep water running class together and I remembered how much I miss getting to hang out with my buddy doing runs together.  After finishing my Grand Canyon training I decided to check out the class schedule for our gym.

I reached out to my friend and signed up for the spin class that she takes.  The class is at o'dark hundred or 5:10 on the real clock! Holy moly that is super early for me!  So far I have mixed feelings on the class.  The teacher isn't the easiest to follow...her cues aren't always clear and her class seems one dimensional.  There is little variation from class day to class day which is disappointing.  The music changes for each class but the general class content seems to be about the same.  The class also seems to have regulars and that is who the instructor teaches to versus the entire room.

This class session runs until mid-December so I'll keep at it for the rest of the session.  I think I might have gotten too used to riding on my bike trainer where I can control the music or entertainment and the workout.  Hopefully with time I'll rediscover my love of spin class!
Posted by RunningWhit at 7:38 PM No comments: