Recovery begins when the workout ends!

Disclosure - Abloc Nutrition provided me with a product sample to taste for this review however all opinions are my own based on my experience with the product.

Triathlon season is quickly approaching and with that comes an increase in training as all three sports become important to my training.  In April, I heard from Mitch at Abloc Nutrition with information about their recovery drink product.  I had the Triple Threat training camp on my schedule in May and knew that recovery was going to be very important to make it through that weekend of training.

Abloc Endurance Recovery is chocolate milk flavored powder that you combine with milk or water to prepare.  The formula is made in a 2 to 1 carb to protein ratio and has a low sugar content.  All you need to prepare this drink is a shaker bottle and 1 scoop of the powder mix.  With a simple shake, the powder dissolves and you have a yummy chocolate milk flavored drink.

I make no secrets about my love of chocolate so I was anxious to see how the chocolate flavor of this drink tasted.  I was very surprised to find that the powder dissolved completely and it didn't taste chalky like other chocolate protein drinks can sometimes taste.  I prepared my drink with cold water instead of milk simply because I was on the go and didn't have refrigeration for the milk.  It worked out great and I felt great knowing that I was kickstarting my recovery by getting this drink made within the first 30 minutes after my workouts.

The science behind this recovery formula is that it delivers both carbohydrates and protein in a balanced ratio of 2 to 1.  Within the first 30 minutes after exercise, muscles are able to replenish the glycogen stores more efficiently which is enabled through the complex, low sugar, carbohydrate content.  The protein helps rebuild your muscles to reduce muscle soreness.

Abloc Nutrition was founded by Mitch and Matt, both athletes who were struggling with their own recovery after hard training days and found that products out there didn't meet the needs of the endurance athlete. Their research led them to the ideal carb to protein ratio to speed up recovery and reduce muscle soreness.  What I like is that the guys put as much work into developing a great tasting product as one that helps with recovery.  So many protein products out there have a horrible taste and the Abloc Endurance Recovery breaks that mold with a great chocolate milk flavor.

You can learn more about Abloc Nutrition by following their Facebook page here.  If you want to try Abloc Endurance Recovery for yourself, check out the single size serving pack which is available on the Abloc Nutrition site.  It's a great way to sample the taste before purchasing the full container.  The sample size would also be great to pack with you for races or training that is away from home.  The 2lb canister has approximately 28 servings which equates to just over $1 per serving which is a very economical price.  (From my experience, the chocolate milk in the past that I have purchased for recovery has cost over $1 so this is a comparable price for a sport specific recovery product.)  Make sure you make recovery a priority because it will help you have more consistent training!
Posted by RunningWhit at 8:19 PM No comments:

Memorial Day began with a trip to Beaver Lake for the annual Ozark Open Water Swim.  This is an event with three different race distances - 1K, 2K, and 4K.  The morning dawned a little gray and dreary with a forecast for rain later in the day.  For most of the morning the sun stayed hidden behind the clouds which was okay with me since glaring sun can make sighting in an open water swim difficult.

I selected the 2K race distance which is the distance I've done at this event in the past.  The water temps were in the high 60's to mid 70's so it was wetsuit legal.  Yippee! With lots of TriSlide to protect my neck from chafing I got my wetsuit on and was ready to go.

The race started in 3 waves based on the event distance.  There was about 5 minutes between the waves which really helped spread the field out.  The races were chip timed with a running start and a run out to finish.  As is fairly typical for me, I had some pre-race confidence struggles and seeded myself to the middle/back of the pack.  Once I got into the water though I realized I was being silly and just needed to swim my race and see how well I could do.

The course was a straight out and back.  There were two triangle buoys at the .5K and 1K mark.  Between those buoys were smaller round buoys for sighting.  I tried to swim the buoy line as much as possible.  As I neared the 1K turn buoy, I managed to run into another swimmer on his way back.  It was a fairly uneventful collision and neither of us was really disrupted.  I caught up to some of the 4K swimmers as I neared the turn buoy and that really helped lift my confidence that I was having a good swim.

On the way back to shore, I managed to miscount the buoys....which meant that I began my finish kick a lot earlier than I would have normally.  I had my eye on a couple other 2K swimmers that were swimming to the far right of the course.  I was trying to race them into finish and trying to pick my pace up to stay in line with them.  I got a little discouraged when I spotted the extra buoy that I had forgotten about but told myself to just hold on the pace and finish strong.

For the finish, I tried to swim up to the shore line as far as possible but ended up standing a few feet earlier than I should have.  This meant I had a farther run out of the water but I just lifted those knees up high and raced the guy next to me.  I beat him by maybe 1-2 seconds but it was worth it to have a strong finish!

I ended up 9th of 44 overall in the 2K distance and 4th female.  My time was about 2 minutes faster than in 2012 and my swim distance was spot on for a 2K distance according to my Garmin.  My official time was 32:42 or 1:33 per 100yd.  I was pretty pumped with that pace and with my improvement over my last time at this event.

It was fun catching up and cheering on all the other athletes.  The Triple Threat crew did pretty well with podium spots which was fun to celebrate.  There is something peaceful about swimming open water events so it was a great start to the day for me.
Posted by RunningWhit at 8:54 PM 1 comment:

Farmland - The Evolution of a Tradition

I still remember that first trip to the farm where the directions were to turn left after 3 miles by the two silos.  It's no surprise that us city girls got lost trying to follow these directions!  And as you can see from the bottom picture, we forgot jackets so it was flannel shirts for everyone!

A few months ago, Arkansas Women Bloggers announced that the Arkansas Farm Bureau was hosting a special screening of the new documentary film Farmland.  I quickly signed up to attend the screening and learn more about young farmers and the evolution of farming in America. 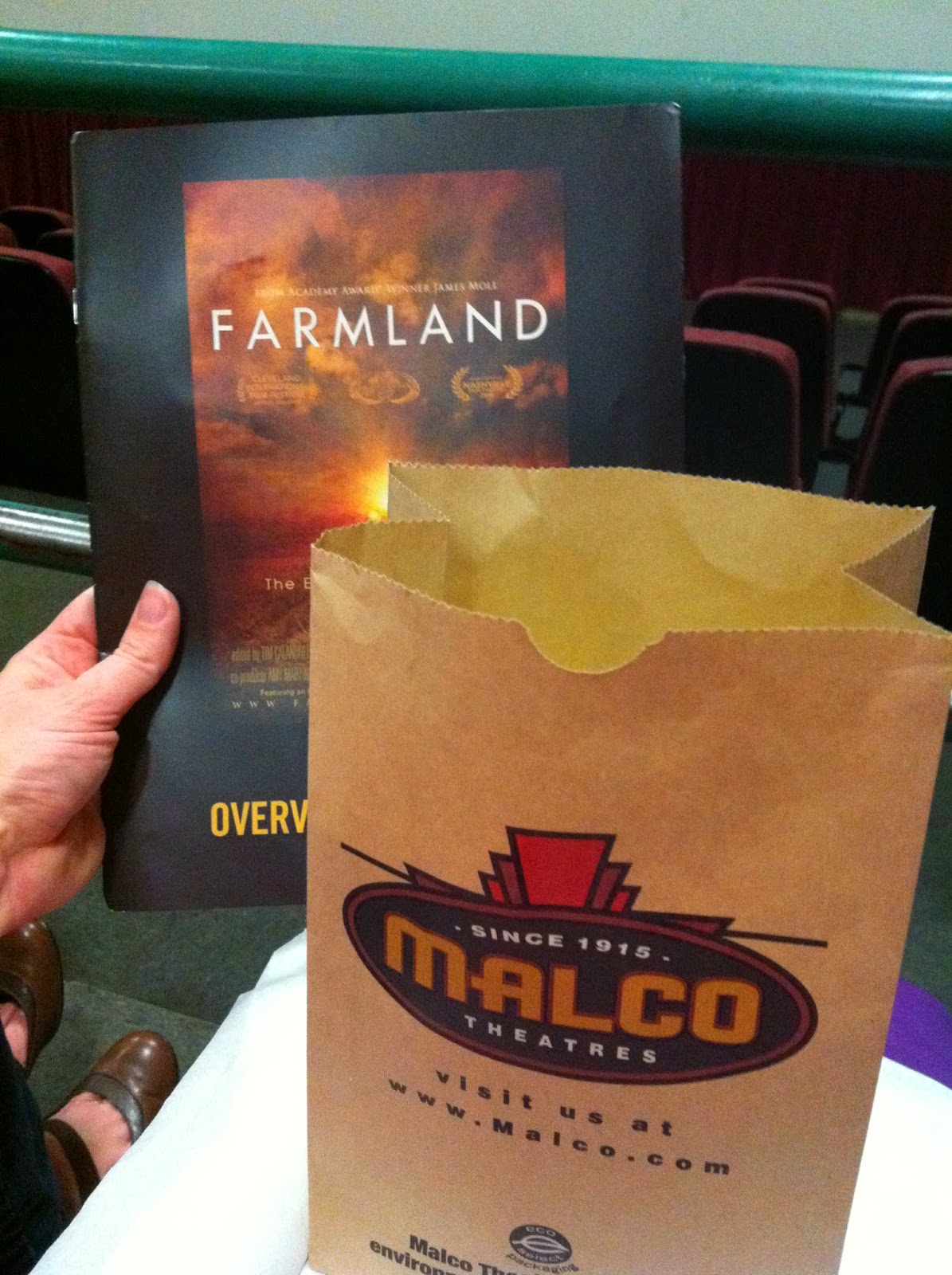 Farmland follows the story of six farmers and ranchers who cross a broad spectrum from first generation farmer to a multi-generation farmer.  Less than 2% of Americans have a direct connection to agriculture except we all eat and consume the products of agriculture.  You would think we all should feel connected to our food sources but outside of certain hot topics around things like organics and GMO we don't tend to own our role in the food supply chain.  The goal behind this film is to strengthen the relationship between the consumer and agriculture producers. 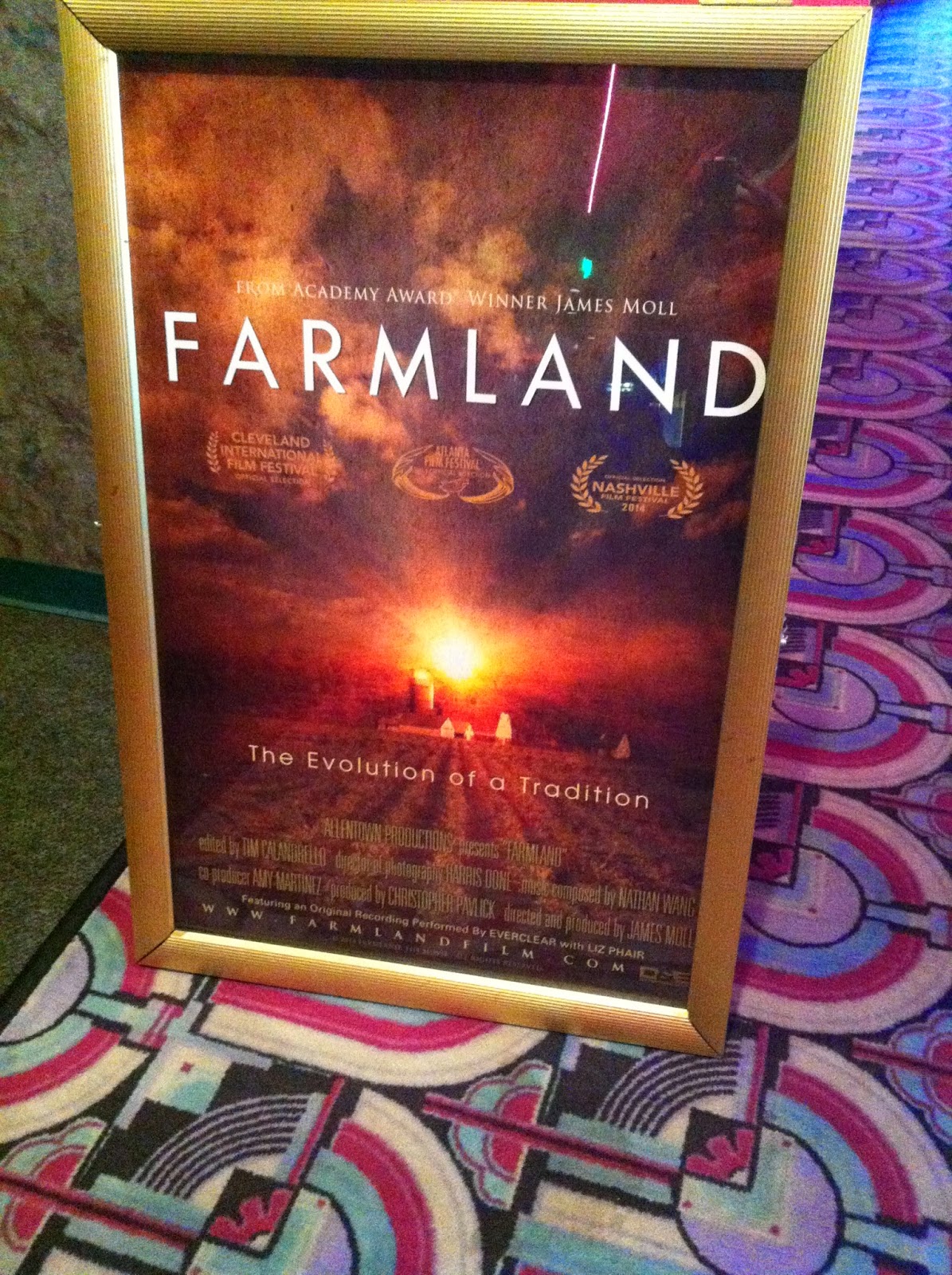 Some of the themes that I thought really resonated in the film are that all farmers and ranchers have struggles and challenges every day to provide a good supply of food for us and the world.  We rely on farmers to provide us with a healthy and abundant food supply and that is a trust that farmers take very seriously.  Becoming a farmer isn't something that happens overnight, it takes time and experience.  There is a huge skill set in being a good farmer from knowing when/what/how to plant to having the skills to harvest for peak freshness and taste.  There is a reason the subtitle to this film is called The Evolution of a Tradition.  It really does follow the evolution of farming.

My favorite farmers profiled in the film were Margaret Schlass - the one woman farm supplying a Community Supported Agriculture membership program and Sutton Morgan - the son of a farmer who branched out into organic farming.  Margaret seems to be a one woman phenom! She is a hard worker who is building her business and helping her community.  Sutton on the other hand is a 4th generation farmer who relies on the mentorship from his parents in building his organic business.

The film made me think about my own connection to the food that I eat.  The timing of the screening was perfect since our local farmers market has just kicked off.  I'm excited to shop for fresh, locally grown produce.  The thing that I will take from the film is that I should engage in conversation with the farmers and ask questions about the produce that they have grown and be more than just a consumer.

One surprising discovery about the film was that director James Moll had previously directed one of my favorite running documentary films called Running the Sahara.  Farmland film was made with the support of the US Farmers and Ranchers Alliance.  The USFRA works to coordinate dialogue for Americans on how food is grown and raised.  You can learn more about Farmland at www.farmlandfilm.com.  If you have the chance to view the film, I recommend that you do.  It is a great look into the challenges, struggles, and triumphs that young farmers are facing in bringing us a sustainable and healthy food supply.
Posted by RunningWhit at 8:40 PM No comments: